November 20, 2017
In past eight years, number of cars in Delhi has gone up by 73%, while number of buses has fallen by 17%. Worse, Delhi Metro expansion is delayed and fares have been hiked drastically. 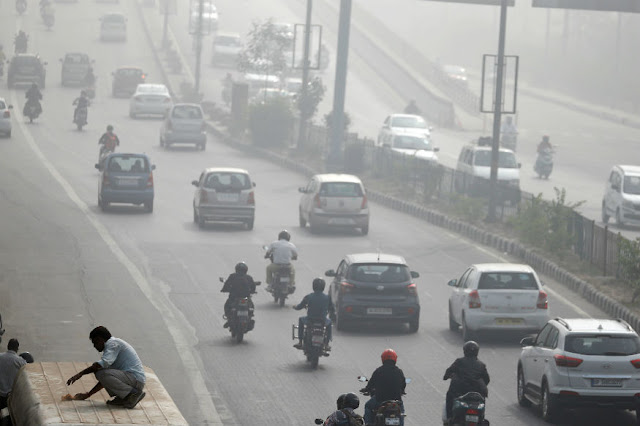 Air pollution is a matter of public debate today and everyone seems to have his or her own magical solution. Despite several committees and authorities working to address the problem, every year it’s getting worse.

Even the courts have been proactive in taking cognizance of the severity of the problem — several directions have been given by the National Green Tribunal and the Supreme Court.

Measures like Odd-Even scheme for vehicles have been criticised for not being effective enough by environmentalist as well as the NGT. The ban on diesel vehicles older than 10 years also met a firm resistance from the government recently, which the Tribunal refused to lift.

Measures such as immediate ban on construction activities, restrictions on entry of heavy vehicles in Delhi etc, are expected to provide relief to some extent, but the air quality of the city still remains hazardous for citizens and no long-term solution has been formulated so far.

In my opinion, most of the steps remain short-sighted with very little political will to prevent the same problem from recurring the next year. There is a pressing need to accept the real issues ailing Delhi’s air and take preventive measures instead of taking few short-term analgesic measures just to reduce the immediate suffering of people.

Undoubtedly, the crop residue burning is a significant problem and it was already banned in Haryana in 2003, Punjab in 2013, followed by Uttar Pradesh in 2015. However, the ban has been barely effective, mainly because of lack of human resources to enforce such a ban and lack of financial investment to provide alternatives and incentives to the farmers to help them shift from their traditional practice of burning the crop residue to machine-based treatment (eg. straw baler, happy seeders, rotavators etc).

At this point, the Chief Minister of Punjab’s claim that stubble burning is more of an economic issue holds substance.
While stubble burning in Punjab has emerged as one of the softest targets during winters, we cannot rule out the contribution of other significant sources of air pollution.

IIT Kanpur’s report on Delhi Air Pollution, 2016 specifically states that in winters, biomass burning contributes 17-26% of the PM10-PM2.5 in ambient air, while the secondary particles (main sources are Sulphur Oxides from thermal power plants and Nitrogen Oxides from vehicular emissions) contribute 25-30% and vehicles alone contributes 20-25%. This definitely requires our attention.

The number of registered vehicles in Delhi has already crossed 1 crore mark in 2017. This includes 66.48 lakh two-wheelers and 31.72 lakh cars apart from other vehicles like trucks, buses, three-wheelers in the city. Comparing data from 2007-08 and 2015-16, it can be easily understood that the number of buses has decreased significantly while the number of taxis have doubled in last 8 years. There is more than 70% increase in number of two-wheelers, four-wheelers and goods vehicles in the same duration.

Ultimately, with such increase in number of vehicles, even stricter emission norms like BS-VI proposed to be implemented in 2020 may be good for only maintaining a status quo.

While they may discourage people from using their personal vehicles, but that will only facilitate the richer to avail exclusive benefits. It is much more important to limit the number of vehicles that can be registered in Delhi. This can be done either by limiting the number of personal vehicles which would be registered per year using lottery system or by bringing some policy to limit number of vehicles a family can buy.

These kind of caps have been successful in checking the growth of private vehicles in other countries; for example, new car registrations dropped by 75% in Beijing, below 10% in Shanghai and Singapore controlled its vehicle growth rate to 0.5%. Such kinds of policy decisions also suffered from challenges in implementation but Delhi can definitely learn from those experiences.

All this cannot be achieved without providing a state of the art public transport system in Delhi. Though the vast network of Delhi Metro is a good sigh of relief, but last mile connectivity is still a critical sector where much work is needed to be done.

While the number of buses have decreased on Delhi roads, the fares of Delhi Metro has been increased twice this year. Government needs to understand that public transport need to not only to be accessible and comfortable but also affordable.

The other significant source of particulate matter in Delhi is the secondary particles formed due to emissions from thermal power plants. Scientific modelling studies have shown that the pollutants emitted from power stations can travel up to 400 km and IIT Kanpur report also highlighted that there are 13 thermal power stations in and around 300 kilometer of Delhi.

Shutting down Badarpur power plant as an emergency measure may be a right thing to do, but the real problem underlies in relaxed emission norms and poor monitoring mechanism.

In December 2015, the central government came up with an amendment in Environment (Protection) Rules, 1986 prescribing emission standards for thermal power plants.

The rules suffered from some basic flaws like the emission standards for Sulphur Oxides (SOx) and Nitrogen Oxides (NOx) were relaxed up to six times for older plants as compared to the newer power plants to be installed from January 2017.

Further, the rules do not mandate installation of Flue Gas Desulphurization (FGD) and Selective Catalyst Reduction (SCR) units which are must to control SOx and NOx respectively. This exemption in the rules has helped even the newer thermal power plants which became operational in 2017 did not install the FGD, though they must install it to achieve the emission norms.

The situation becomes further serious when it comes to monitoring the emission from the thermal power plants. The EIA Notification, 2006 mandates the thermal power plants to submit self-compliance reports every six months to the authorities while the Environmental Clearance granted them mandates them to make public the emission levels of key pollutants and installing online continuous air quality monitoring equipment. However, such measures are hardly complied with in practice.

A recent study by Vidhi found a dismal state of self-compliance by project proponents and monitoring by Regional Offices of Ministry of Environment after a project is granted Environmental Clearances. While capacity of undertaking physical monitoring is highly limited due to scarce resources with Central and State Pollution Control Boards (PCBs), there is a marked shift in promoting continuous online monitoring systems in industries, real time data of which is linked to CPCB servers.

Due to lack of requirement of any government certification or quality standards with these real-time monitoring devices-the major criticism is how effective and true this data is? What makes this monitoring further ineffective is non-availability of this data in public domain, though the same is readily accessible to top CPCB officials.

The real time ambient air quality data provided by CPCB at present is limited to only 86 stations in the entire country, out of which 10 are in Delhi. In such a scenario, it becomes very important that CPCB also makes public the real-time emission data of industries. This will not only help in understanding the main sources of pollution, but a reliable and transparent monitoring system will also ensure greater compliances.

Therefore, need of the hour is to take a 360 degree view of the problem and target interventions at structural and technical levels with strong political will and infusion of requisite funds to change the status quo.

(The author is Senior Resident Fellow at Vidhi Centre for Legal Policy. He is one of the co-authors of Cleaning Delhi’s Air-Implementation Action Plan, 2017. Views expressed are personal.)

Anonymous said…
What's Going down i'm new to this, I stumbled upon this I have
found It positively helpful and it has aided me out loads.
I am hoping to give a contribution & help other users
like its aided me. Great job.
20 March 2018 at 21:55