Kanhar Project in UP: Another unwanted dam | SANDRP 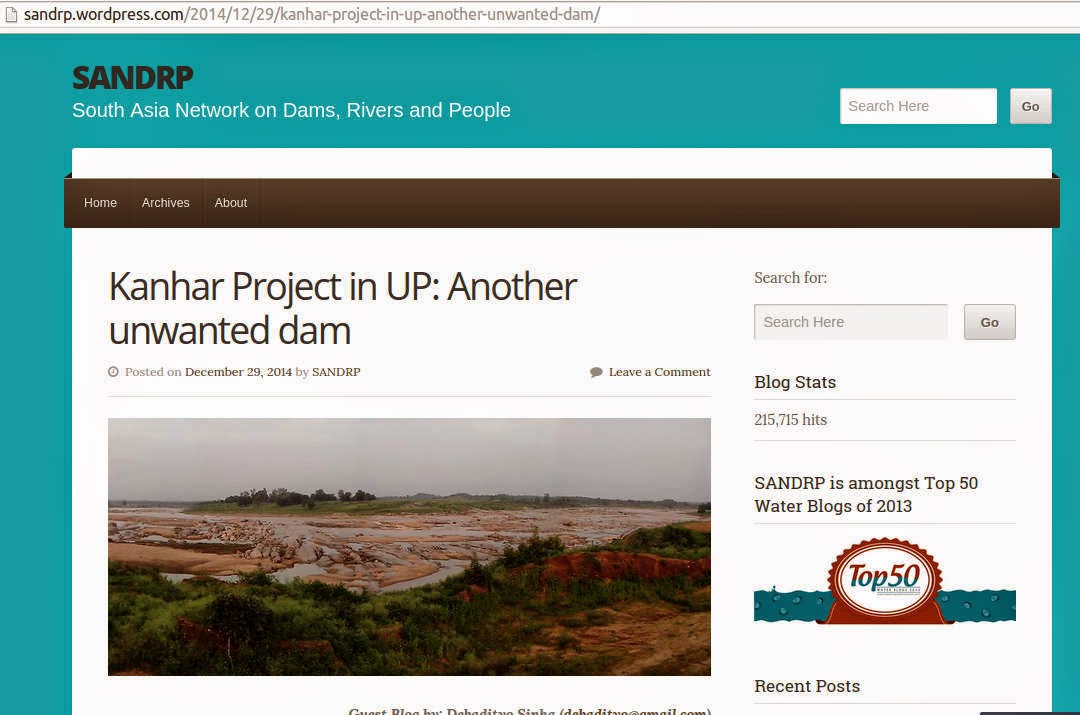 Kanhar Dam is one of those projects which is an example of how so called developments worsen the situation for the people and environment. The project conceived 37 years ago has been in abeyance since last 25 years. With the latest inauguration of construction of the dam on 5th December, 2014 after a span of 25 years without a fresh proper cost benefit analysis (CBA), any environment impact assessment (EIA) or Social Impact Assessment (SIA) ever, the commencement of project activities is making way for a large social uprising in the heavily industrialized zone of Uttar Pradesh.

Kanhar Irrigation Project is located downstream of the confluence of River Pagan with Kanhar near village Sugawan in Tehsil Dudhi of District Sonebhadra, Uttar Pradesh. It was originally approved by the Central Water Commission in September, 1976 at an initial budget of Rs. 27.75 Crores. Initially, there was some foundation work undertaken but the project was soon stalled due to inter-state issues, lack of funds and volcanic protests from tribal communities of the region. As per a progress report of the project for 1998-99, the construction work is completely abandoned since 1989-90. Since then, there are numerous occasions when the project was inaugurated, notable among them is one on 15th January, 2011 when the then Chief Minister Mayawati laid foundation stone again. Another inauguration took place when on 12th November, 2012 when Mr. Shiv Pal Singh Yadav (uncle of present CM Akhilesh Yadav), the Irrigation Minister of Uttar Pradesh laid another foundation stone to start the work of spillway. However no work could be taken up.

The project proposes a 3.003 km long earthen dam having a maximum height of 39.90 m from deepest bed level which may be increased to 52.90 m if linked to Rihand reservoir. The project envisages submergence of 4131.5 Ha of land which includes parts of Uttar Pradesh, Chhattisgarh and Jharkhand mostly dominated by tribal communities. The project is expected to provide irrigation to Dudhi and Robertsganj Tehsils via left and right canals emerging from both sides of the dam with capacity of 192 and 479 cusec respectively. The culturable command area of the project is 47,302 ha. The project imposes enormous threat not only on the environment and ecology but also to thousands of tribal families of Vindhyas living there since hundreds of years and has demanded for protection of their forests and proper implementation of R & R (Rehabilitation and Resettlements).

Kanhar Project Map As per 1976 documents

The controversy actually began when the Central Water Commission in its 106th meeting of Advisory Committee for the ‘techno-viability of irrigation, flood control and multipurpose project proposals’ approved the project at an estimated cost of Rs. 652.59 crores at 2008-09 price level. A bare perusal of the minutes shows that there is no consideration of the environment and social impacts of the project. The minutes also show that the approval was granted in the presence of representatives of Ministry of Environment and Forests and Ministry of Tribal Affairs.

The inauguration of the project held on 5th December 2014 was marked by the presence of heavy police force and paramilitary forces which were deployed to guard the construction site on the river bed. Few roads have been blocked by Police and it is reported that the entry to the project site is stopped 1.5 km ahead of the construction site. To speed up the work, regular increase of heavy equipments and machinery is in progress.  CCTV cameras are also reported to be installed at the site to keep a regular check on the activities.

There is a constant effort by the administrative authorities to suppress the voices of aggrieved and affected raised against the project  and those who have attempted to do so are being arrested under the Uttar Pradesh Gunda Niyantran Adhiniyam, 1970 or ‘Gunda Act’. There are repeated incidences of arrests and FIRs against the local people. Incidences of people-police clashes are now becoming a daily routine affairs. Recently the SDM, Dudhi along with the other policemen was also injured in a similar clash. In retaliation to it, there were series of arrests being made by the police and FIRs were filed against 500 unnamed locals. There is an atmosphere of fear already created among the villagers in the region.

The question arises is, whether due procedure has been adopted by the state government as prescribed under law? And if yes then what is the reason for suppressing the voices and why is so such chaos being generated by the government? The project is in controversy due to several questions which are still left unanswered and requires a detailed clarification from the State Government.

The rise of Kanhar Bachao Andolan

The Kanhar Bachao Andolan (KBA) is the first of its kind integrated protest which emerged in the form of an organization in the year 2002 under leadership of a Gandhian activist Bhai Maheshanandji of Gram Sawaraj Samiti based in Dudhi tehsil of Sonebhadra and Gram Pradhans of villages which would be submerged if the project is implemented. The KBA has been raising the issue of tribal rights and discrepancies in the R & R before the state govt. through representations, protests and petitions in High Court. There is a continuous peaceful campaign against the project by KBA since a decade including the unceasing protest which started from 5th December, 2014 on the other side of the River Kanhar opposite to the construction site. Fanishwar Jaiswal, who is a former-Gram Pradhan of Bhisur village and an active member of KBA said, “There was a public meeting organized by the MLA of Dudhi in June, 2014 to address the R & R issues. The Gram Pradhans of several villages presented their views against this project and also submitted written representations; however those views and protests were never registered by the government in any of their reports.”

I got a chance to visit Sonebhadra district in July, 2014 where I came to know about this project and the ongoing protests. I visited the project area and interacted with the people of Sundari and Bhisur villages of Dudhi tehsil which are the affected villages among several others. Dense forests and agricultural fields were the most common landscape feature.  One could have seen the abandoned machines, several of which were half-sunk to the soil, broken houses with ghostly appearances which were informed as the once constructed officer’s colonies of the project and old rusted sign boards stating ‘Kanhar Sinchai Pariyojna’. Those structure and abandoned equipments were clear evidences of the Kanhar project which was abandoned long back by the government.

Till 1984, a large number of trees were felled by the government in the midst of protests by the tribal communities. But, since then the work did not take place and there was no displacement of tribals. They have now planted more forests in their villages and have their own regulation bodies for protection of these Forests. “Cutting trees is seen as sin in our culture and we have strict fines and punishments if someone does that. Trees are our life and we are protecting them for our children”, said Pradhan of village Sundari which will be the first village to be submerged by the project.

We discussed about the status of biodiversity and came to know about their dependence on traditional medicines which they obtain directly from the forests. All the villagers I met were satisfied with their rural lifestyle and have developed their own way of sustaining agricultural production by choice of specific vegetable, pulses and crops depending on climate.

It was informed that every year elephants visit the Kanhar River from the Chhattisgarh side. Animals like Sloth Bear, Leopard, Blackbuck, Chinkara and several reptiles are abundantly noticed by people due to presence of hills and forests in the region.

‘We do not want dams; in fact we don’t need it. It is for the industries which need water, and for which they want us to give up our fertile ancestral land and destroy the forests which we have protected since centuries’, said a villager.

It is suspected that the Kanhar dam is being constructed to supplement the Rihand dam to provide water for the industries in Sonebhadra and adjoining region. It seems that the government has not learnt from the experience of Rihand dam which was constructed in 1960s in the same district in the name of irrigation, but gradually diverted the water for thermal power plants and industries. The water in Rihand dam is now severely contaminated with heavy metals which has entered the food chain through agriculture and fish.  Like the Rihand dam, the new project will cause more destruction than good to the people of the region.

It is very clear that the project is going to destroy a huge area of dense forests and going to displace not only the tribal communities from their roots but also affect the rich flora and fauna of the Sonebhadra. To know about the actual status of the environment and forests clearance of the project, RTI (Right to Information) applications were filed with the Ministry of Environment, Forests and Climate Change in July, 2014. The belated reply was received only in Dec, 2014 on initiating a first appeal.  The responses states that the ‘Environment Clearance’ was granted on 14.04.1980 which is more than 30 years old and therefore any further information with respect to the same cannot be granted since the same is exempted under the RTI Act 2005. Hence, two things are clear that the project requires a fresh ‘Environment Clearance’ under the EIA Notification, 2006 & a forests clearance prior to start of any construction activity.

In view of this fact, On 22nd December, 2014 an application was filed by Advocate Parul Gupta on behalf of applicants Debadityo Sinha (Vindhya Bachao) and O.D. Singh (People’s Union for Civil Liberties) before the National Green Tribunal praying for taking action against the UP Government for carrying out construction activity of the project without statutory clearances under EIA Notification, 2006 and Forest (Conservation) Act, 1980. The application came up before the bench of Justice Swatanter Kumar on 24th December 2014 wherein stay orders were issued against the Government with clear indication that no construction activity shall be allowed to be undertaken if they do not have ‘Environment’ ‘ and ‘Forest’ Clearance’ as prescribed under law.

The major Environmental and Social issues which require to be carefully considered before the project is allowed to move ahead are as follows:
Conclusion

There is no justification for the project. There has not even been an application of mind if the project is beneficial to the people and society. There is not even any impact assessment, nor any democratic decision making process. A huge amount of public money is already spent on development of schools, roads, hospitals, houses etc in the area, which will be lost permanently by this project. At the time, when this project was incepted in 1976 the environment and social scenario of the country and this region was very different from what it is today.  River Sone was not in critically modified state, Forests of Sonebhadra and adjoining regions were still intact, human population was lesser, technology was not so advanced, science of climate change was not fully understood and the need of protection of environment was not felt or required as it is today.  In 1976, protection of rivers was not a primary concern as the problems were not evident as it is today. In such scenario furthering such abandoned projects shows poor understanding of environment and insensitive attitude by the policy makers. It is thus important to undertake a proper cost-benefit analysis, a fresh Environment Impact Assessment and Social Impact Assessment, conduct proper options assessment to understand the implications of this project on the ecological balance and people keeping into account the present scenario. Such studies should undergo a detailed scrutiny and public consultation process.

Despite NGT stay, UP govt goes ahead with construction of dam
https://www.hindustantimes.com/india-news/despite-ngt-stay-up-govt-goes-ahead-with-construction-of-dam/article1-1304050.aspx